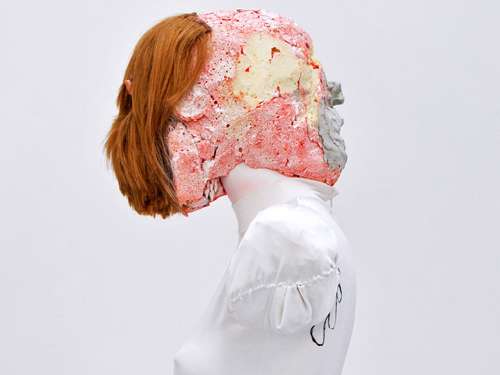 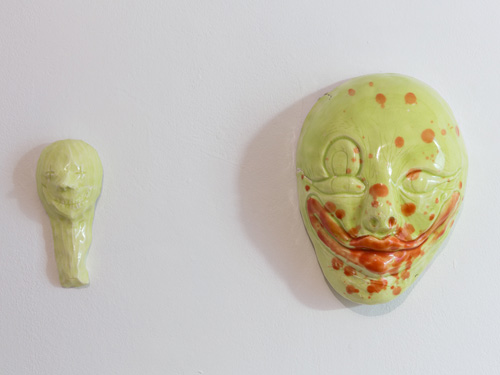 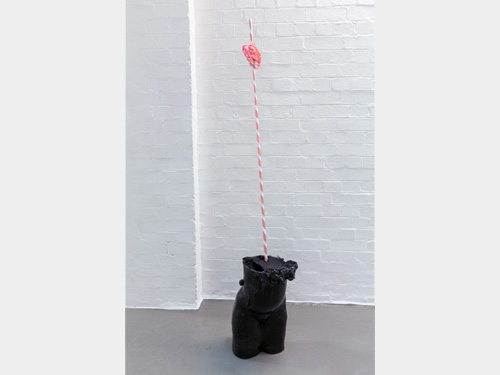 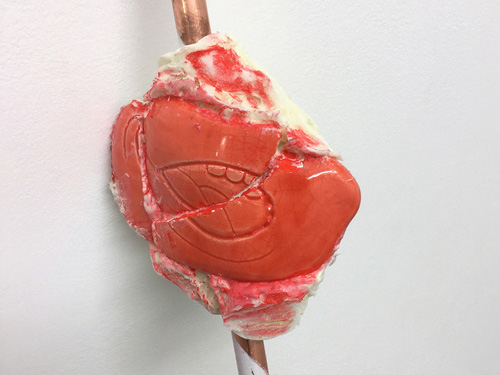 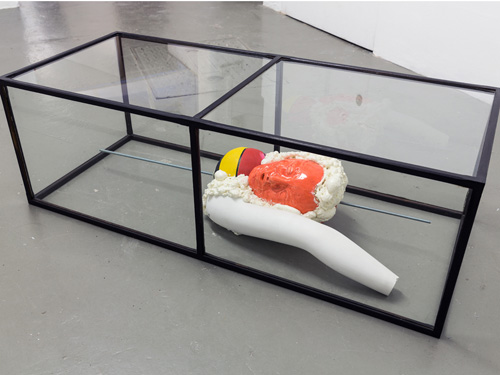 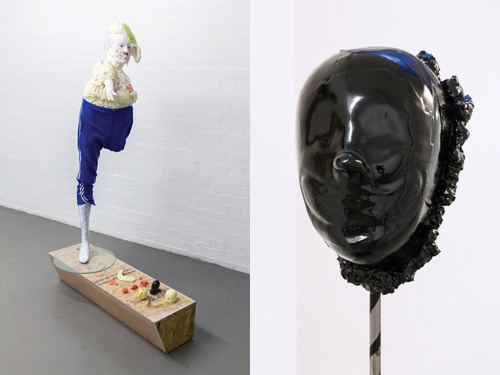 Kate Lyddon’s practice spans painting, drawing and sculpture. The Mark Tanner Sculpture Award supported her to develop the sculptural aspect of her practice.

Entering into Kate Lyddon’s studio is like walking into a strange club, whose members defy categorization, and elicit extreme curiosity, if not a little fear. Lyddon responds to what she sees as the “surreality of our existence, how that experience manifests in human behaviour and social interaction … the madness and crudeness of the world.” Her characters exist at the extremes of possibility and beyond, fusing glamorous outerwear or a svelte silhouette with grotesque features or accoutrements. Some of these sculptures are clothed in ritualistic fashions reminiscent of sports team costumes, military uniforms, or carnival fancy dress. Their outfits all reference tribal statements of belonging, but worn wrong. Her caricatures are trying and failing to fit in.

Weighing in against these narrative suggestions is an intuitive maker’s engagement with materials and processes, which take the works in a different direction. Lyddon's new works for the MTSA reference classical notions of sculpture yet are executed with an essentially modernist approach to making, using both traditional and conspicuously contemporary materials. Lyddon has been experimenting with ceramics and glazes, combining these thoughtfully formed elements with detritus, offcuts, found objects. This shifts the focus away from a defined subject, affording semi-nonsensical images/objects - nonsense enough to reflect Lyddon’s experience of the world.

Linking together the disparities of her forms are a series of plinth structures made by Lyddon in a variety of shapes and brought into play as part of the work by the incursion over and into them of disparate linking elements such as a small stretched canvas painting, a sketch on paper, or marks painted direct onto the surface of the material from which they are made.

Kate Lyddon received her MA Fine Art from Chelsea College of Art, London in 2006. Previous to this she studied at The Royal University College of Fine Art, Stockholm, and Canterbury Christ Church University, Canterbury. She has made solo presentations of her work in 2012 at Studio1.1, London and Galerie d'YS, Brussels, in 2011 at Galerie Charlot, Paris and in 2008, at Fold Gallery, London. Her paintings are in many collections in the UK and internationally including the Saatchi collection.